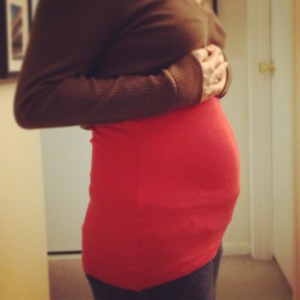 So, exciting news, I haven’t taken a pill since last Friday. That’s a whole week! I am so freaking excited. I’ve still been nauseous which is less than fun but I haven’t actually gotten sick. I didn’t say anything online all week because I didn’t want to jinx it but I think I can declare myself officially weaned off the anti-nausea medication. Wee!

I’m feeling way bigger this week. My grandpa lovingly tells me I’m getting fat every time I see him. If it were anyone else on the planet that would probably make me burst into tears but somehow my grandpa can say it and it comes off as endearing. He’s a special man. Joel also kindly pointed out that I’ve started to waddle a bit sometimes. This is due to my lower back pain so it’s not all the time but now that he said it I’ve started to notice myself doing it. It concerns me a bit that I’ve started pregnant walking already because I feel like I have such a long way to go. I’d love to find a chiropractor in my area but since we have an HMO I’ve put off going through that process. I’d also love to find one that uses an activator as that’s the technique I was raised on but that might be asking too much. If anyone in the Chicago area has a suggestion though I’d love it.

This week I found out something that kind of surprised me. I don’t hate it when people I know touch my belly. I really thought I would but honestly? I kind of love it. Now, I have yet to have a stranger do it. I’ve joked that if a stranger comes up and touches my stomach I’m going to just do it right back to them. We’ll see if I’m brave enough if/when the time comes though.

Other than that it’s been a relatively low key week and that’s fine with me. I know the holidays are zooming towards me and that will be it’s own form of crazy. And of course I want zero excitement at all times pregnancy wise. I have felt occasional tightness which I can only assume are braxton hicks contractions. They’re never painful or remotely regular but they sure are a strange sensation. I also get paranoid every once in awhile because I read too many stories online and if I don’t feel Baby Boy move for a while I get nervous. Of course as soon as I get nervous he starts doing acrobatics and proves I’m just driving myself crazy and should probably stop reading Baby Center and other blogs. But I’m already addicted so too late.

When I said I was going to do these updates once a week I planned to do more than just these updates. I have a few stories from early in the pregnancy sitting in my drafts and a rather funny experience trying on clothes from last week so I’ll try to get some of those up between these updates.