Today I said goodbye to someone who has been with Joel and I from practically the very beginning. We got him a couple months after we got married. We’d just moved out of my hometown to be closer to Joel’s new job. I was lonely and needed a friend. So off to the pet store we went and spent $14 on a little blue parakeet. 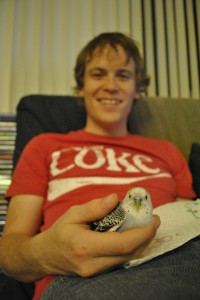 We named him Einstein.

No particular reason for that name except I thought it was funny. He almost got renamed when my nephew Hunter saw him for the first time and exclaimed “TURTLE!” Einstein seemed to fit him though so it stuck.

Through the years he was my little buddy when I was home alone waiting for Joel to get off work. He loved the sound of running water and punk rock music. He was also probably Five Iron Frenzy‘s littlest fan. He loved to rock out. He rarely ever screeched or made the loud obnoxious noise parakeets are known for. He mostly just chirped and sang pleasantly or had little conversations with the birds outside the window.

He was a afraid of almost everything. He didn’t even like to be held for a long time. We tried to get him toys and even another parakeet buddy but he wanted nothing to do with them. As long as he had his music or running water he was happiest.

He eventually warmed up to us and realized we weren’t out to kill him. When I spent a year based in DC while Joel was back here in Chicago he and Joel became really close. They never lost that special bond. He was meant to be a friend to me but he ended up being Joel’s confidant during all the hard times while I was away.

Then the last couple months he started to look a little rough. His feathers weren’t as bright and he went through a molting phase that didn’t ever really end. The last couple weeks he started falling off his perches. And then in the last few days he just didn’t try to get up on them anymore. He just hung out at the bottom of his cage. His one little foot curled up under him and he never used it anymore. We had to move his food and water onto the floor of his cage so that he could eat and drink.

Then this morning he sang one more quick little song. It stood out to me because I realized I couldn’t remember the last time I heard him actually sing.

Then he let out what sounded like a painful cry. I went over to check on him and part of his bottom beak had broken off completely. It was the saddest thing I’ve ever seen. I called Joel and he rushed home so he could take him to the vet. I was too much of a mess to go with him. It just broke my heart to see him in such pain.

Joel and I said our goodbyes to him and I stayed home and just cried. The vet said it was nothing we did wrong. He couldn’t be 100% sure without very expensive blood work but all the symptoms pointed to a tumor. It would have cost hundreds of dollars to even try to treat him and there was no guarantee it would do any good. He was just in too much pain already so we decided the kindest thing was to put him down.

I miss him so much already. The cage is already in the garage because it’s just too painful to see it sitting there empty. Looking at the spot where it used to sit makes me cry though.

I think Phoebe will miss him too although she was never a big fan. I blame that on the geese that used to live in the backyard of our old apartment. Bullies. But we could always say “Where’s Einstein?” and she would run to his cage. If he got too loud she would run over and grumble at him or stare at him in interest.

He was old and up until the end he lived a really nice life. I wish we would have taken him to the vet sooner. I feel so guilty that we let him be in pain at all much less letting it get to the point of his beak breaking. We knew in the last several days that he was really sick and we’d probably have to have him put down. I just didn’t want it to be true. I wanted him to suddenly perk up and be his happy little self again.

We did the kind thing, although I wish we’d done it sooner. Knowing that doesn’t make it any easier though. He left a void bigger than I imagined he would. He was always just there, in the background making my day a little brighter and more pleasant with his song. And now he’s gone.

A part of our family died today. I miss you so much my little friend.