At 13 I started my rebellious phase and became obsessed with getting my belly button pierced. It was the coolest thing ever and I had to get it done.

Only I was 13. And I did not receive an allowance or have any kind of job. So even if I could have found a place that would do it, I had no way to pay for it. Instead of giving up on it I decided to do it myself. With a safety pin. In a church bathroom.

I thought it was amazing. Looking back all I can think is how lucky I am that I didn’t give myself an infection or blood poisoning or something. It was also way too shallow (which probably saved me from that infection) and I never would have gotten an actual belly button ring in it because duh, safety pin.

Of course I couldn’t keep it a secret, what’s the point of piercing something if you can’t show it off, am I right? So my mom found out. And, being an intelligent adult, she asked me to take it out. I didn’t want to so she made a deal with me, if I’d take out my (really poorly done) piercing she would take me to have it done on my 18th birthday and she’d even pay for it.

I guess she figured I’d outgrow the desire. Ha. She kept her word though. On my 18th birthday she and I went to a reputable piercing place and that was my birthday present that year.

Fast forward to last year when I first found out I was pregnant. I decided I didn’t want it to stretch out and at 26 I figured I had kind of grown out of it anyway. I left it out even after we lost that pregnancy and I basically assumed it had closed up by now.

In the last week or two my tummy has been growing at an even more rapid pace and in my last weekly update I mentioned that my scar was getting uncomfortable. I then noticed some red streaks around it and thought, here come the stretch marks. Only the red was just around my scar. And then I noticed it was changing. The other night it was really uncomfortable and so I messed with it a bit and noticed some white gunk inside the scar. After messing with it some more I’m not sure if it was lotion that got caught in there or actually a sign of infection. Either way, gross.

It’s now red and painful to the touch. 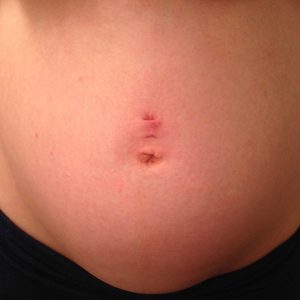 I had a closer picture to show but frankly, it grossed me out and it’s my belly button. You get the idea.

I’ve been much more careful to avoid getting lotion in it and I’ve been cleaning it twice daily with a q-tip dipped in rubbing alcohol. It still hurts but I haven’t noticed any more gunk in the actual scar, which leads me to believe (hope?) it was in fact just lotion caught in there.

The thing is, I figured that a nine year old scar wouldn’t get irritated. I mean, if it’s completely healed skin, how can it right? When I posted about it on Facebook several people said that the same thing had happened to their belly button scar when they got pregnant. I very much had a “Why did no one tell me this could be a thing?” moment.

I thought my biggest worry with my belly button piercing during pregnancy was it stretching out and looking ugly. Turns out it can be quite painful too. I’d like to say that if I’d known I wouldn’t have gotten it done… but who am I kidding? I was a stubborn teen then, nothing was going to stop me, not even some future theoretical pregnancy. Thanks a lot teenage me.