Always on my mind

I’ve gotten so many lovely comments of congratulations since we announced things Saturday. Joel and I both feel so loved and grateful to have so many wonderful people in our lives.

Even with all the excitement and well wishes things have yet to really sink in for me. I still don’t feel much different although my appetite is all but gone and I had my first faint hint of nausea yesterday. Food sounding gross to me hasn’t stopped me from eating though, probably too much. We’ve been out a lot and that equals eating out which equals tons of junk food which equals me feeling like I’m getting a tummy already.

I also have the nagging thought in the back of my head that anything I put in my mouth is potential poison. I find myself second guessing everything I eat. I know it’s silly and I’m not stressing out about it, but the thought does cross my mind every time I sit down to a meal or reach for a snack.

Yesterday we went to the Chicago auto show which was a blast as usual. 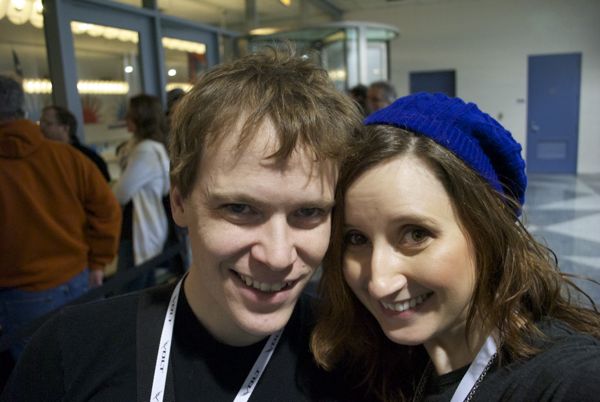 For the first time we weren’t alone, we went with Joel’s sister Beth and her boyfriend Jim. 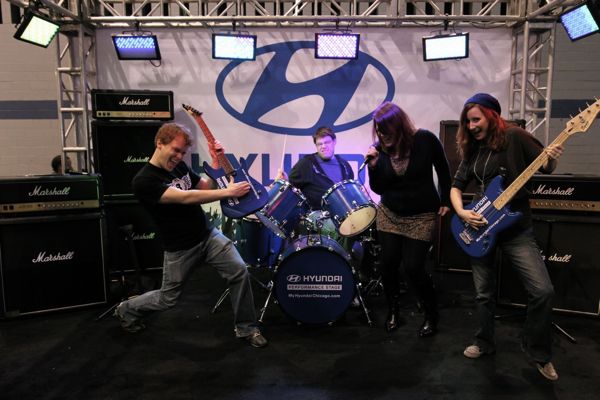 It was so much fun having more than just us there, although I have to admit I have tons of fun doing anything with them so I wasn’t a bit surprised. Acting like a crazy garage band was definitely a highlight. We look good right?

We did make jokes about it being the baby’s first auto show and every time we’d lose Joel (he always managed to be the one separated from the group) Jim would call out “Preggers!” which gave me the giggles every time. To be clear, Preggers was never my nickname, always Joel’s.

It’s so funny how the baby is never out of my mind for a second. I checked that the test drives didn’t warn that pregnant women shouldn’t do them. I mean really? Driving slowly in a circle? I get more jolts from the pothole filled streets of Chicago. Still, I thought about it. I was insanely tired so I got a chai latte from Starbucks, but not before checking that there was less caffeine in it than the max recommended amount.

I posed for a picture on a motorcycle, 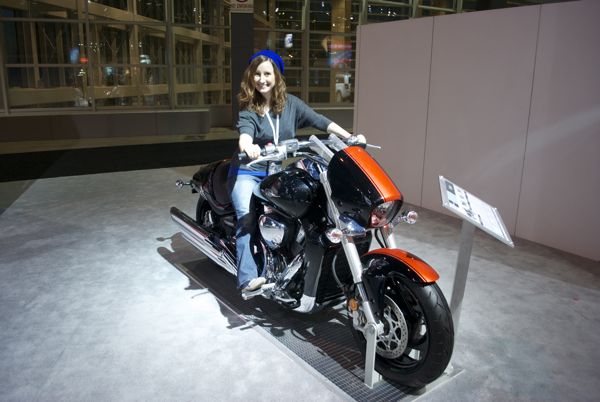 and as I was stepping off to give someone else a turn an old guy standing near said to me “That sure looks good on you.” and chuckled in a way that only pervy old guys can. My first thought was are you kidding me? I’m pregnant! Obviously (thankfully?) there’s no way he could have guessed that just by looking at me but because it was on my mind it made it so much more gross to me.

I catch myself grinning all the time. I want to shout it out to perfect strangers. I feel like I’m carrying around a secret and yet I feel like everyone should know.

At the same time I’m still a bit afraid that it’s not real. Like I said, I don’t feel much different. Just the occasion whiff of something that seems extra strong or extra gross. But then how do I know it wouldn’t have seemed strong/gross anyway? I feel the occasional turning of my stomach but how do I know it wasn’t because of the last thing I ate? Joel says my boobs are bigger (and likes to recheck just to be sure very regularly) but I’m not entirely sure that’s not because I’ve been eating too much junk food and may have put on a few pounds. Of course the biggest symptom is still a lack of AF and an even stronger second line when I took a second pregnancy test (see above doubt for reasons why I retested).

I have my first OB appointment on Friday so I suppose I’ll know for sure then. I’m very excited about the practice I chose but that’s a whole other stressful tale that I will tell at another time.

For now I just wait and grin secretly to myself every few minutes. It’s a lovely little secret I have, isn’t it?