Tonight I can officially add the sidewalk to my list of dangerous objects.

Joel and I are running again. Hush, I heard that eye roll. I haven’t really mentioned it here or on Twitter because this is the third time I’ve started the C25K program. ::hangs head:: I know. I’m horrible at follow through. But whatever, this time I’ve gone much further than ever before and it feels awesome.

Joel and I have a habit of running in the evening. This started out of necessity because 6 weeks ago when we started it was 85 degrees, humid and sunny during the day and the one time we tried running in the afternoon I about collapsed halfway through. Humidity is the devil. Take note.

Well Fall is upon us here in Chicagoland and the temperatures have been extremely pleasant. Instead of changing our habits though we’ve continued to run after dark. It just works for us. Or it has so far.

Tonight I was feeling great on our run. The previous run was a full 20 minutes straight. I know! Head explosion over here. I’m still in shock that I actually did it. Anyway, after that long run going back to intervals (per the program) felt like a piece of cake. The weather was nice, I had my headphones in and was rocking out. I only had about 2 minutes left of my last running interval before the cool down and I let my mind wander.

I’ll never remember where it wandered because I realized the sidewalk had suddenly become slightly uneven and gravity was about to make me it’s bitch.

In my head it all happened in slow motion. The sidewalk dipped and my feet didn’t get the message fast enough. I tripped slightly and must have over corrected because instead of righting myself I kept going downward.

Bam! My right knee hit and I somehow still stumbled a bit more before my left knee followed with only slightly less force.

Bam! I reached my right palm out to catch myself but my momentum was too great and I continued down even further. The momentum was so great I scraped my knuckles on that same hand.

Bam! My left shoulder hit next and my mind immediately went to my iPhone which was in a case strapped to my bicep. Oh please don’t let it break. Yes, even with the threat of bones breaking my biggest concern was for my iPhone. I realize how pathetic that is.

Finally Bam! My face met the concrete and I could not fall any further.

I lay there for a moment completely in shock. My brain did a quick mental check of my bones and nothing felt broken. I lay face down on the pavement and the shock of it all, plus the sting of the scrapes caused me to burst into tears.

Joel was almost immediately by my side and I was soon sitting up on the sidewalk, testing my limbs to make sure none were seriously injured. Thank goodness none were. I was bleeding but not broken.

A minute passed, I’m still sitting there bawling when I realize a car is pulling up next to us. And then I saw the pretty red and blue lights flick on.

I scrabbled to my feet, tears and pain suddenly gone with the adrenaline of the embarrassment. The officer was incredibly nice and offered me an ambulance (which I obviously told him I didn’t need) and a ride home (which I was too embarrassed to accept). Because he stopped he had to take my name and information and write a quick report of the incident. Fan-freaking-tastic. I am officially on record as a klutz. His exact words were “So you just tripped over the curb or something stupid like that?” Yep, exactly stupid like that.

Needless to say I didn’t finish the run but walking home wasn’t a problem. Want to see the damage? 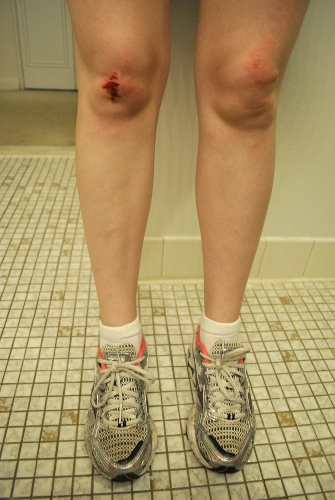 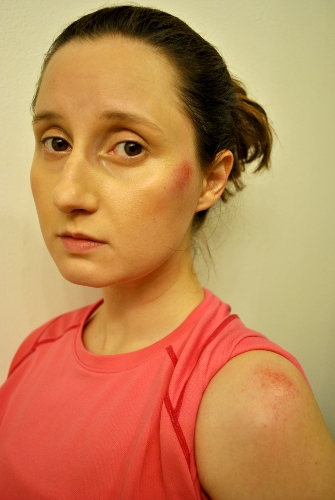 Shoulder and face. Please excuse the sweaty hair and face. Running isn’t something I get dressed up for. 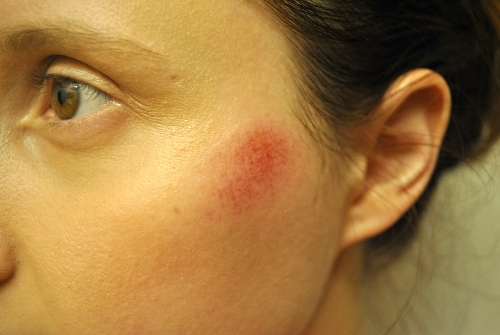 So all in all nothing is too horrible. They definitely sting and I’m not looking forward to the probable black eye in a couple of days. I’m just super grateful it’s nothing more than a few superficial scrapes. As weird as it sounds I’m glad I caught myself with my face rather than catching the whole fall on my hands and snapping my wrist. Can’t fix that with a band-aid!

Despite my luck this time I think it’s about time we change our running habits. Uneven sidewalks are much easier to spot in daylight. I’d like to try and keep all my skin attached from now on thank you very much.

The argument against gay marriage