I grew up in the town where Orville Redenbocker developed his famous and delicious popcorn. Hence, the annual Popcorn Festival. With the exception of a few adult years where I was either living overseas or had to work I’ve been going to the Popcorn Festival since I was a little kid. It starts with short 100 meter dashes for kids 2-10. It’s so cute to see my nephews carrying on the tradition. 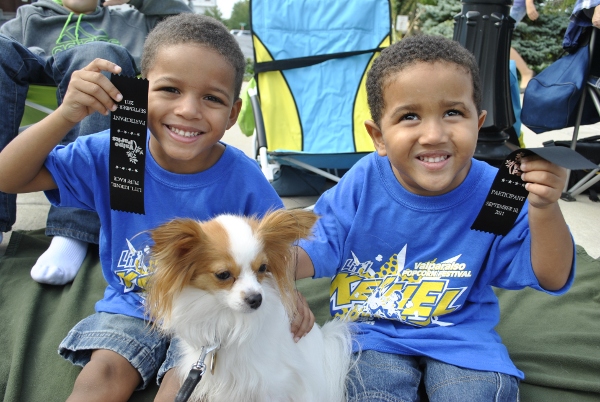 After that there’s a parade in which a float = anything with popcorn thrown on it. 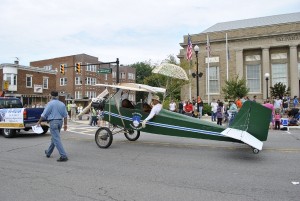 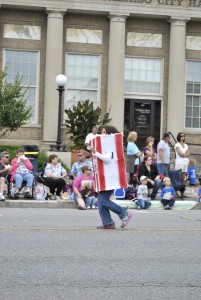 Or people dressed as popcorn. Whatever.

As a kid I remember the floats being these elaborate creations made entirely of popcorn. Not sure if I was just little and thought everything was cooler or if people got lazy because the floats aren’t all that impressive anymore. Oh well, it’s more about spending time with my family anyway. 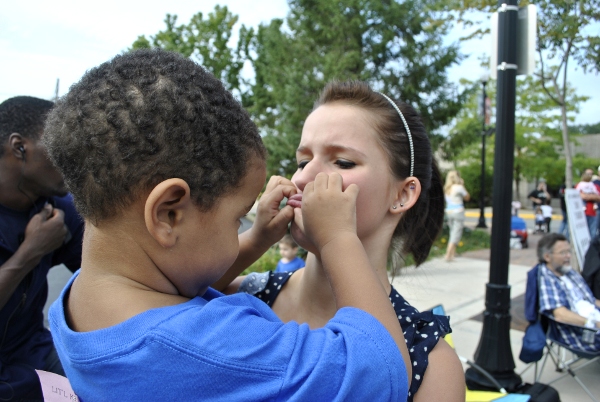 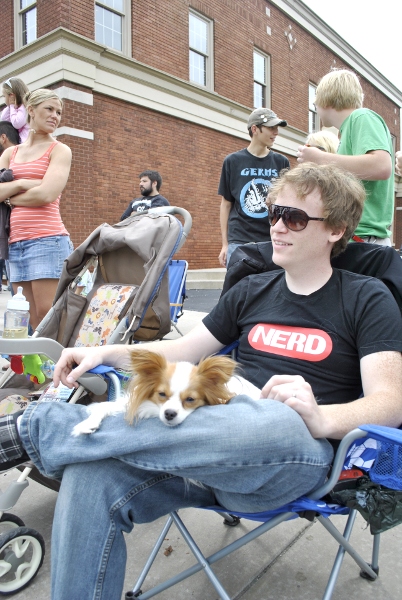 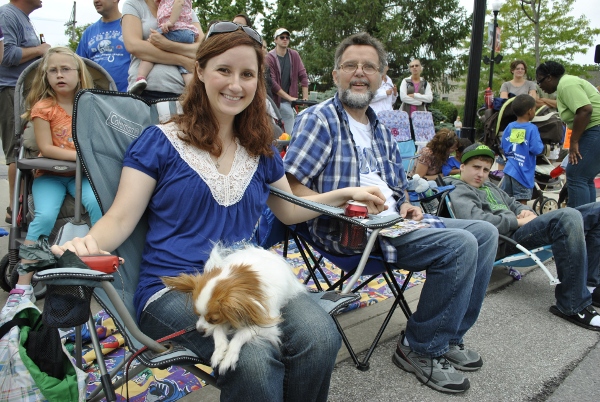 See how my brother is leaning back in his chair? Despite warnings he continued doing it. 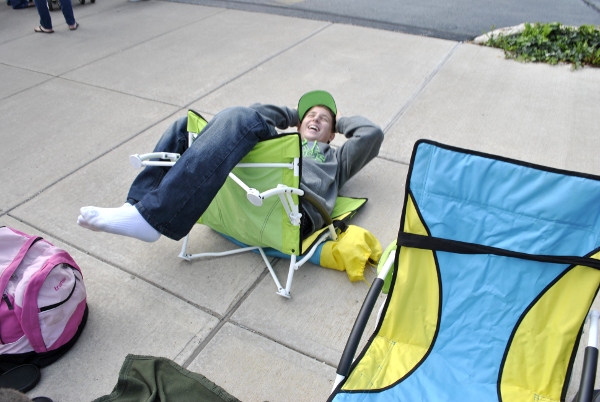 He learned his lesson though.

Once the parade was over we walked around a bit, ate some junk food and listened to the bands that were playing. Normally we’d look around at the booths as there are always some really cool crafts and things. This year it was so insanely crowded that we quickly decided it wasn’t worth it and headed home. I made cake!

If you follow me on twitter you may remember tweeting about my cake wreck. See, in my head I’m this fabulous baker. Unfortunately I have very little experience and so things don’t tend to turn out the way they look in my head. Remember the asshole cake? Yeah.

I do learn from my mistakes though and did not come close to losing a finger or throwing cake across the room. Win!

That’s kind of where the win ends though.

What I learned this time is whipped frosting, while delicious, does not hold layer cakes together well.

Whipped frosting kind of likes to be all airfull and slidey and before you know it your beautiful layer cake looks like this. 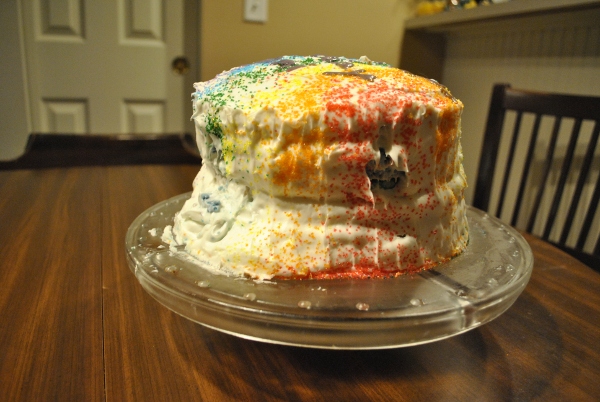 That hole in the frosting is from me trying to push the layers back into place. 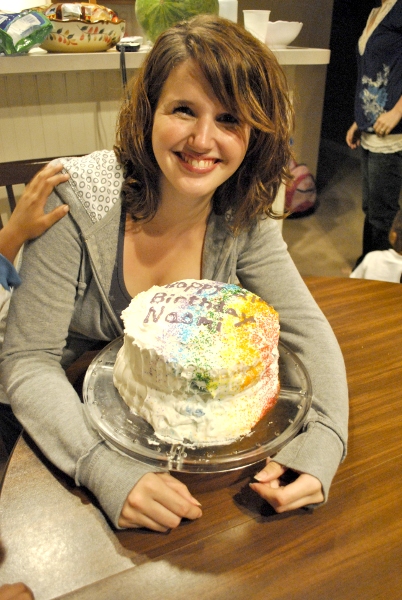 We all got a good laugh out of it though and the really cool thing about the cake wasn’t revealed until I started serving it. 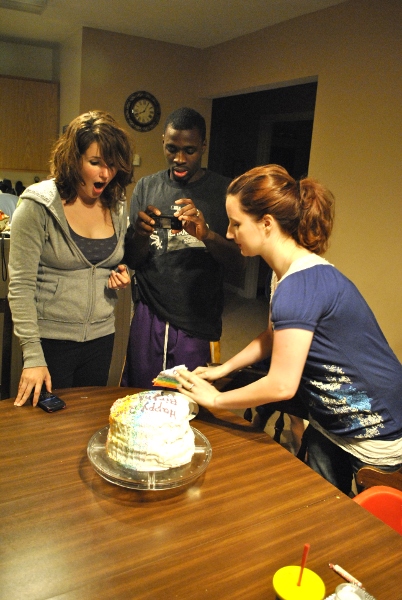 That was the reaction I was hoping for. 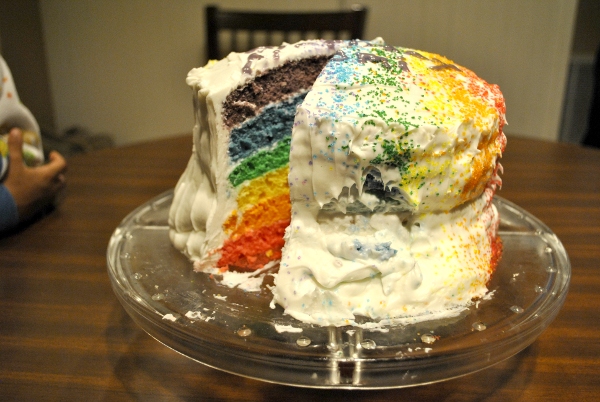 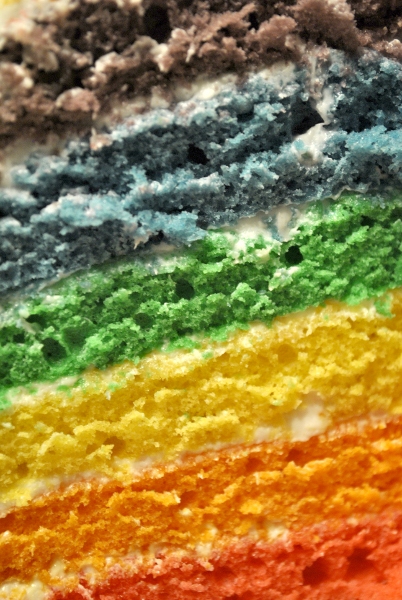 Hot mess on the outside. Awesome on the inside.

Joel and I love going to the movies. We usually go once a week or so. I go mostly for the popcorn but that’s beside the point. We are also a big fan of horror movies. I’ve been going through the horror classics recently. Most of them I was too young (or not born) when they first came out and never got around to watching them until recently. You know, Friday the 13th, Poltergeist, Child’s Play etc. I was excited when I heard that they were remaking Nightmare on Elm St. since we just saw the classic version recently too.

Now, keep in mind three things. First, the theater we see movies at we visit almost once a week. It’s not like they’ve never seen us there before. Joel can’t ever remember which way to swipe his credit card but that isn’t the point either. Second, I am 24 years old and Joel is 28. Third, you have to be 17 to see an R rated movie.

We walked into the theater about five minutes before the show started. (I take awhile to get ready. I mean there was traffic…. what?) Thankfully there wasn’t a line. We walked up to the counter:

Me- Two tickets to A Nightmare on Elm St. please

Teenage theater worker – Can I see your ID’s?

I seriously laughed out loud to that kid’s face. Of course we handed over our ID’s and as soon as he looked at them his face got all red.

TTW- oh wow, you guys look a lot younger than you actually are.

And by a lot younger apparently he means 16. Or, almost half our age. I’ve been told I’ll like this whole looking way younger than I am thing later in life. Honestly, it doesn’t bother me now. I just wish it was a marketable talent. Anyone have a Never-Been-Kissed style undercover assignment they need someone for? I would be so awesome at high school now.

P.S. the movie theater? Full of underage kiddos. I’m fairly certain we were the only people over 17 in there. Now THAT’S how they should test age. Me, yelling at the noisy 12 year-olds sitting behind us = old lady 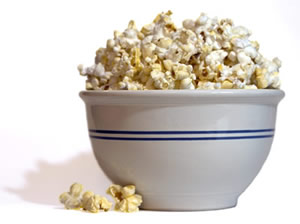 I have a problem. I am addicted to popcorn. I love the stuff a ridiculous amount. If I’m home, I eat it every day. I’ll eat almost any kind of popcorn (except kettle corn, because ew) but the majority of what I eat I make at home with my own little air popper. I pour a half cup of kernels, melt a tablespoon or two of butter to drizzle on, sprinkle on some salt and I am a happy, happy girl. Until recently I was proud of my snack choice. I don’t eat the microwave wave kind that is drenched in oil and fake junk. What I make at home is basically a bowl of vegetables. I mean, it’s corn that is popped. Healthy! I do use butter but a tablespoon only has a hundred calories so it’s not that bad. The thing is, I noticed that after several days of eating an entire batch of popcorn by myself, my clothes started fitting a little tighter. Hm… I looked on the back of the jar of kernels and it said there are 31 calories in a cup of popcorn. I only use half a cup so that can’t possibly be the problem, right? It did seem awfully low though so I did a little research with the help of my friend Google. Oh! That’s 31 calories for a cup of popped popcorn. That’s different. Well how many cups can there really be in a batch? I decided to measure just to make myself feel better.

four,(Maybe it meant for me to pack this popcorn in the cup because there’s not much of a dent in this bowl yet.)

Twenty cups of popcorn in a batch. Oh boy. That’s not hard math, 31 x 20 = 620 calories in my “healthy” snack. That’s not even counting the butter which adds a nice hundred calories or two. So, in total I have been eating 720-800 calories every day as a snack. Dear lord, it’s a wonder I fit into my clothes at all!

Now, those of you who know more about calories and nutrition are probably laughing at my naivety. I probably should have known better since something that big and delicious couldn’t possibly have been a low calorie snack. It was fun while it lasted. I’m still going to enjoy the occasional bowl of popcorn because it’s way too good to give up altogether. However, I have learned once again that everything is good in moderation. Even a “vegetable” like popcorn.