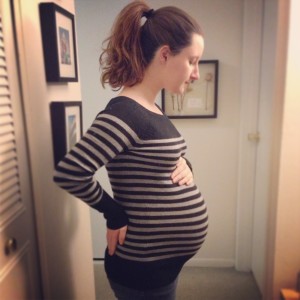 This is my last weekly update before my due date.

Could be my last weekly update period if this kid decides to follow in his mom and dad’s footsteps and be born on a 17th. I’ve been discussing it with Wesley and telling him Sunday is his birthday so he better not miss it. St. Patrick’s Day would be a pretty freaking cool birthday. Plus, my favorite midwife is on call this weekend. Not that I mind who catches him that much, we’ve just seen her the most so it would be cool to have her at the birth.

It’s fine if he picks another birthday. I mean obviously.

I would prefer it be sooner rather than later. But also it would be nice if he waits until at least after this weekend because Joel has his dad-chelor party tomorrow. It’s also my nephew’s birthday Saturday and it would be really cool if my little guy could have his own day. Not to mention my nephew would probably be pretty bummed if everyone got pulled away from his party because I was in labor.

So basically I have a lot of opinions about when he comes. Which means he will likely come exactly when I don’t want him to.

We had another uneventful appointment yesterday where Joel captured this,

which has to be one of my favorite shots of all time. I will never get sick of hearing Wesley’s beautiful healthy heartbeat.

She didn’t check me for dilation again and I’m totally fine with that. If I’m not dilated at all I’ll just be bummed and if I am it could give me a false sense of when things might start happening. There is a tiny bit of me that is curious but not enough to request a check. She didn’t mention if I would get checked at my next appointment (which is on my due date, eek!).

Other than the good appointment, yesterday was a tough day. I woke up, took a shower and promptly puked my guts out. It was a nice little flashback into the first trimester. I remained horrendously nauseated all day, to the point where I couldn’t pull it together enough to go to dance. That was really upsetting, especially since my studio is now on break for the next two weeks. So I guess my pregnant dancing days are over. Sigh.

So now it’s just a waiting game. Joel is incredibly jumpy, which I find completely adorable. I find myself feeling like I need to cling to every second. Every lazy moment, every cuddle with Joel, every moment of sleep. We went to the movies. They asked if we wanted to sign up for a rewards card and we just kind of laughed because who knows when we might be back.

Every wiggle and kick feels extra precious because I know I don’t get to feel them much longer. Of course I can’t wait to nibble on the delicious little toes and knees that have been making my belly dance but I’ll miss feeling him go crazy after I have a Coke or milkshake. I will not miss the nausea or the food aversions or feeling like my pelvis is trying to split in half every time I move, but the kicks? Those I will miss, even the hard ones to the ribs.