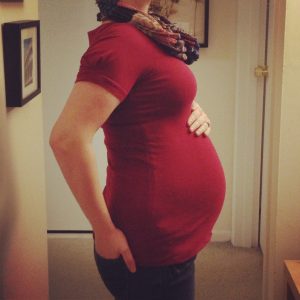 I’m not feeling very inspired to write this post. Probably because I’ve been resisting the urge to crawl into a hole lately, the reasons for which I explained in this post.

I’m not sure if it’s because of those reasons or just extra hormones or a combination but I’ve reached the weepy portion of this pregnancy. I thought I had before but suddenly things have cranked themselves up a notch. Best example lately was when Joel asked me to find him the post I wrote about why I don’t do Valentine’s Day for a post he was writing. Dummy me read through it and got to the part about my childhood dog dying and I had a complete. melt. down.

I grabbed Phoebe and started bawling into her fur about how she was going to die someday too. Poor Joel just sat next to me with a mixture of sympathy and total bewilderment. I mean, my dog died 13 years ago, it’s hardly fresh enough for that kind of reaction. In the middle of my sobs I looked up and saw both Phoebe and Joel staring at me like O_O and just as fast as I melted down I realized how funny it was and started laughing hysterically. Joel then started laughing so hard that he choked.

So yeah, living with me has been a bit of a roller coaster lately. Joel really deserves some kind of medal or something.

Thankfully we have some fun plans for this weekend so hopefully I’ll be able to snap out of this funk.

Tomorrow Joel and I have plans to attend the Chicago Auto Show which I am both excited and nervous about. Why nervous? Because lately it doesn’t take much physical activity to make my lower back and pelvis feel like it’s trying to break itself in half. So fun. If you’ve ever been to the auto show you know it’s huge and even without being pregnant my legs and back could get sore after all that walking. Throw in a 4-5lb human sitting in my pelvis and I’m not sure how I’m going to make it. Joel wants to rent a wheelchair for me but that just feels completely ridiculous. I want to go and I don’t want to be in extreme pain so I may let him talk me into it but, ugh it just feels so melodramatic. I’m pregnant not handicapped.

Someone tell me if it’s really ridiculous or if I should just get over myself.

Saturday we have an interview scheduled at the daycare we plan to send our little guy. I was supposed to be going back to work this March but I took another furlough so I won’t be going back until next March. I’m not sure how that will factor into the daycare thing as I don’t plan to send him if I’m not working. But the interview was scheduled before we knew about the furlough so I guess we’ll see how things go. I feel like a real parent, interviewing a daycare. I guess I should get used to that feeling as I am about to actually be a real parent. I can’t quite wrap my head around that idea yet.

And last but not least, we finally got the maternity pictures! They deserve their own post but I’ll put this one up as a sneak peek.