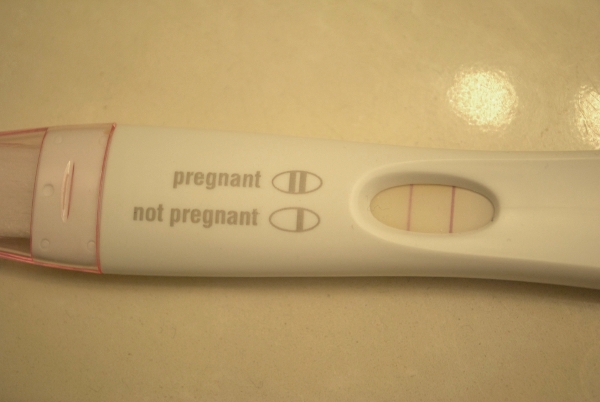 The two little lines that changed my life

I had these grand plans to make this blog about our journey from before we were ready, through trying to conceive then pregnancy and beyond.

Thing is, I felt like I had tons of time before I was remotely ready to start trying to conceive, so I put off writing here.

Then, for no reason at all, Joel and I both said “I wanna baby” and neither one of us said “Oh hell no!”* So, blame the rabies, but we tossed aside the condoms and went for it. I’ve tracked my cycles for years and have a general idea of when things happen but so the first month I pretty much knew we missed our window. Sure enough, we had. No disappointment, I had a feeling it wouldn’t be easy. I didn’t even own a basal thermometer. We figured out early on that birth control made me feel nauseous every. second. of. every. day. so it didn’t take us long into our marriage before we decided to toss it and go with good old fashion condoms.

For five years they worked without so much as a leak or a scare. I actually thought there might be something wrong with one of us they worked so well. I mean, I kept hearing about this baby from a broken condom and that baby from failed birth control blah blah blah and I got this idea that we were playing fast and loose with my uterus every time we had sex.

All that to say when we tossed them aside I really expected we had a long journey ahead of us.

This past month we still both had baby fever which is also something that’s never happened two months in a row. However, we had guests staying with us and we live in a tiny apartment with paper thin walls so out of consideration we held off and I thought we again missed our window. We chalked this month up to really fun practice and set our minds on trying again next time.

Only… the day my app (yes I track my period with an app, shut up) said I was due to start came and went without so much as a hint. Honestly, my only reaction was confusion so I recounted and realised the last several months I’d been having short cycles so I just chalked it up to me going back to my normal lengths.

Today was my adjusted due day.

Still no freaking hint of anything so, even though I promised myself I’d wait until I was officially a day late I peed on a stick.

No mistake there, huh?

So haha, we got pregnant right away. Considering my mom has six kids, and between two of my sisters they have five going on six kids I shouldn’t be surprised at. all.

I am surprised though. And excited. And terrified. I expected more time. I mean, I guess I have nine months to get ready. Because oh my god I’m a mommy.

So anyway, I have zero symptoms so far. The only symptom is a lack of ruined underwear, ahem. I have been taking naps but then I was up till 5am which is pretty normal for me if I take naps so I wouldn’t exactly call that a symptom. Come to think of it, some strawberries at the store the other day smelled super gross to me. They smelled great at first but when I picked them up to get a closer smell I thought I smelled mildew or feet or something so we didn’t buy them. Oh! I also had heartburn for the first time ever in my life last night. What?! Isn’t that not supposed to happen until the baby is big enough to press on your stomach? If that is a symptom already I’m getting a surrogate. It’s not too late for that yet right?

Anyway, due to my family history I really expected to be barfing my brains out at this point. My mom and one of my sisters are both cursed with severe all day sickness so I just assumed I’d be the same but so far so good. I hope I didn’t just jinx myself.

I haven’t told Joel yet. I wanted to pee on a stick when he was home but I couldn’t wait and now I’m going to die of excitement while I wait the million and a half (three) hours until he gets home. I will try and tape his reaction and post it. I wish I had taped mine but like I said before, I really truly didn’t expect to see a second line on that stick. **

*oh yeah, this is a mommy blogger who curses. Get over it.

**I waited until after I told him the news before I published this. It’s part of the journey though so I’m leaving it in.